While developing the patent-pending ADR Notable Noteboard, our aim was to create a digital tool to replicate the mediator’s whiteboard. We wanted the versatility and ease of use of the physical whiteboard used in in-person mediations, but with enhanced organizational and sharing capabilities to better serve virtual mediations. Thus, the ADR Notable Noteboard now functions as a digital whiteboard: perfect for sharing on a flatscreen in a mediation room or via a shared screen online.

One customer, Susan Guthrie, was recently using ADR Notable in an online mediation of a parenting dispute. She shared her screen so the participants could see her ADR Notable Noteboard, turning it into an organized virtual whiteboard. The parties immediately focused on the Noteboard: making suggestions about what should be added or how the notes should be linked or rearranged. Their focus on the Noteboard generated energy in the virtual room. As Susan marked agreed proposals, the automatic check marks were a visual sign of progress and acting as a reward.

After hearing this anecdote, I was inspired to further research the use of whiteboards in mediation and how technology might improve that experience.

Typical Uses of a Whiteboard in Mediation

While there are many uses for a whiteboard in the mediation process, the most common is to create a shared list. That list could be:

The two main advantages of using a whiteboard are transparency and engagement. Transparency because all of the parties can see what is on the list. And engagement because the parties become invested in the work product to which they are contributing.

Many mediators start the whiteboarding process by trying to get agreement on a list of issues that need to be resolved in order to declare success. In some cases, that is relatively easy. It could be nothing more than a payment of a sum of money: the only disputes being how much and when. In more complex cases, getting the parties to agree to a comprehensive list of issues may be just as difficult as resolving those same issues!

Most view whiteboarding as an important step used to limit the likelihood of a previously unidentified issue arising at the last minute or even post-settlement. A whiteboard is a particularly effective tool to get the parties to think hard about a comprehensive list at the early stages of a mediation.

The Benefits of Using a Whiteboard in a Mediation

We’ve all heard that some people learn better through auditory inputs, while others from visual inputs. However, that theory has recently been called into question.

Teachers and trial lawyers alike know that combining auditory and visual inputs is almost always the best approach. Furthermore: they’ve known that for decades. That’s why they use auditory and visual inputs concurrently when they want someone to focus, absorb, and remember information. Teachers might add that active engagement – through doing – doubles down on the likelihood of comprehension and retention.

In mediation, that means using a whiteboard together with facilitated conversation may increase the likelihood that the parties achieve a deeper understanding. A deeper understanding of the details, context, positions, and interests of the other party.

As mentioned earlier, a whiteboard also adds transparency. The real-time generation of the list or other content allows all parties be on the same page. Whiteboarding can help build trust and confidence in the process. Additionally, if all parties contribute, whiteboarding can create a sense of investment and ownership in the generated content. As the mediator lists items on the whiteboard, the parties can hear the explanation and reasoning behind each item. That awareness may contribute to later success in reaching an agreement.

Additionally, a whiteboard returns a visual indication of progress. Even if the first step is only listing the issues, parties may interpret that as a necessary and fruitful start to further negotiations. Whiteboards document progress and can be used as a kind of scorecard as items are addressed.

There are a few downsides to using existing whiteboards, whether they be physical or virtual.

The first is legibility. You have to handwrite on a physical whiteboard (and poor penmanship is unfortunately more common than good penmanship). While there is a text function on the typical Zoom whiteboard, it is a little hard to use.

Second, reorganizing notes can be cumbersome. One cannot move notes around or organize under headings without a lot of time spent configuring the blank whiteboard. Many virtual whiteboards severely limit users’ ability to reorganize or recategorize notes. Without the use of sticky notes (which isn’t environmentally-friendly) or starting from scratch, reorganization is just about impossible on a physical whiteboard.

Finally, a mediator cannot seamlessly use the whiteboard content to create a summary of agreed terms or final agreement. This limitation unnecessarily increases the amount of work the mediator has to complete.

The ADR Notable Noteboard delivers the benefits of a whiteboard while solving the downsides. Mediators can add notes easily with a keyboard for legibility. On an iPad, the mediator’s handwritten notes convert to text instantly, right within ADR Notable.

Unlike the blank slate of a digital whiteboard, mediators can choose how to organize their notes in the Noteboard in ADR Notable. The flexibility of the ADR Notable Noteboard allows mediators to organize, categorize, and reorganize as much as they need. Mediators can attribute notes to a party, move them, link them to other notes, or edit the notes with exceptional ease. They can also change the methods of organization by renaming columns (or, as we call them, lanes) to reflect the way the mediator thinks is best. Thus, the whiteboarding process is easier to both follow and understand.

The design of the ADR Notable Noteboard encourages engagement by the parties. For example, issues receive a checkmark automatically when the parties agree to a proposal addressing those issues. That visual cue results in a real-time feeling of satisfaction, creating an almost game-like visual experience.

What happens when you have multiple mediation sessions and need to pick up where you left off? In ADR Notable, mediators can save their notes on the Noteboard with the case until they are intentionally deleted. This allows subsequent sessions to start right where the parties left off.

Finally, the Noteboard feeds directly into the Term Sheet, cutting down on unnecessary work for the mediator. Any agreed proposals automatically copy to text editors in the Term Sheet. From there, parties can expand the notes into the full text of their agreement.

The ADR Notable Noteboard will change the way you whiteboard during your mediation sessions, whether they be in-person or virtual.

We invite you to try the ADR Notable Noteboard while displaying or sharing your screen during your next mediation session. For a full comparison showing how the Noteboard solves common whiteboard issues for mediators, please see the graphic below. 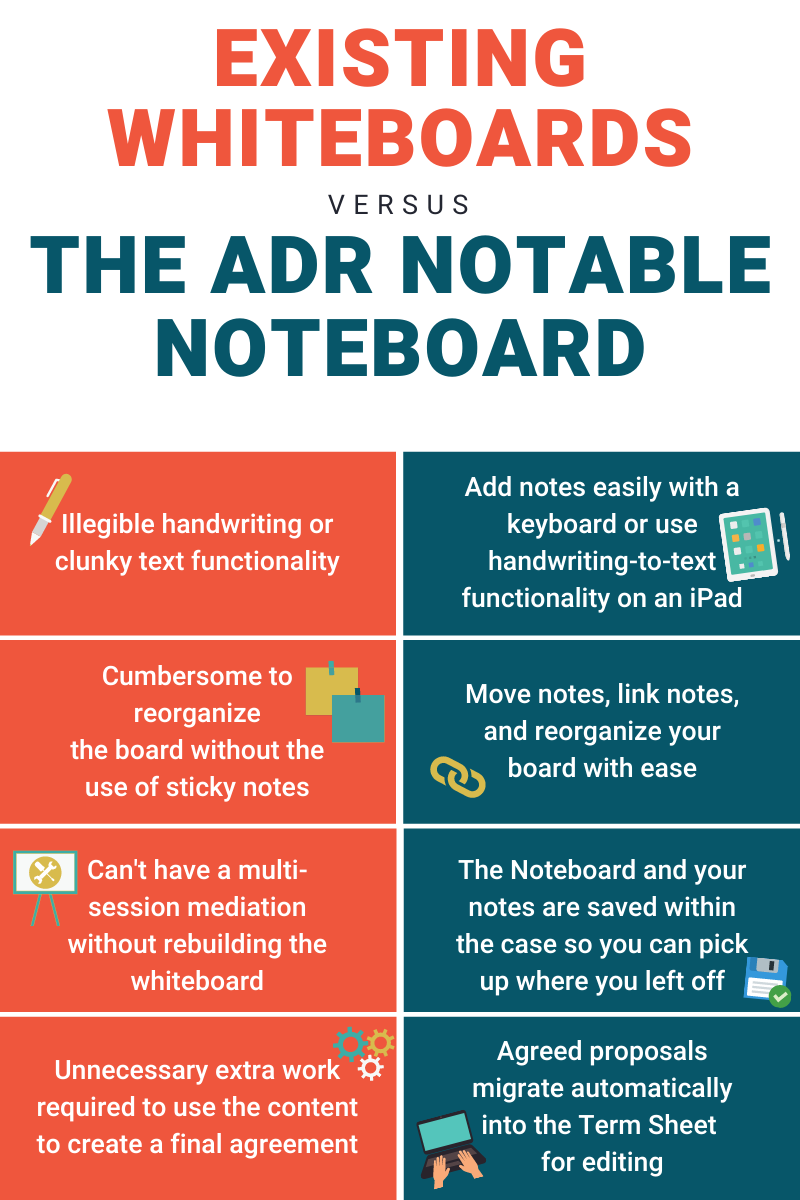 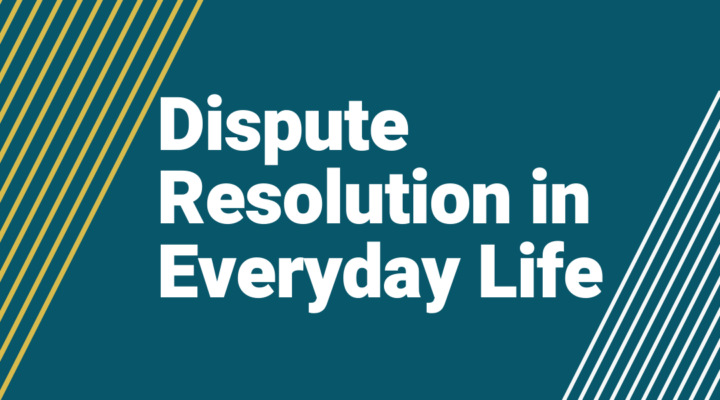 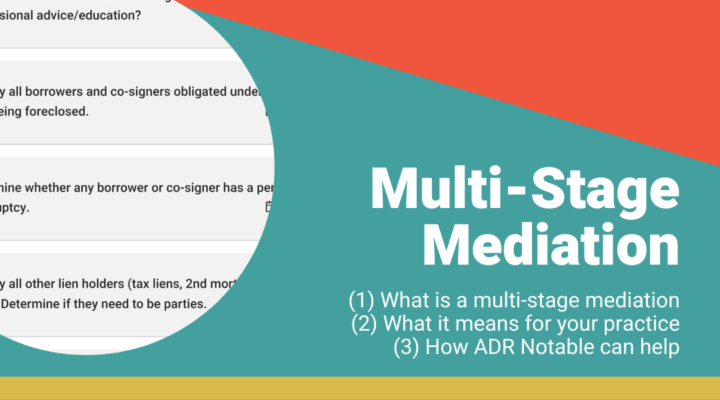